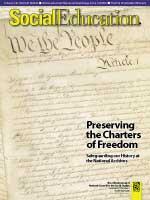 In Focus: No Child Left Behind
285

The Shrinking of Social Studies


Robert W. Howard
Standards-based reform has forced teachers to focus on tested subjects to the detriment of crucial disciplines like social studies.

No Child Left Behind: The Impact on Social Studies Classrooms


Prepared by the Staff of Social Education
Leading NCSS members reveal the effects of No Child Left Behind on their schools and their classroom teaching.


Stuart Phipps and Susan Adler
The authors respond to charges that NCSS has downplayed historys role in the curriculum.

Iraq Today: The Challenge of Securing the Peace

Michael Hussey and Lee Ann Potter
During World War II, the Library of Congress went to extraordinary lengths to protect the nations founding documents in case of an attack on the capital.

African American Women and Espionage in the Civil War

The Escape of the Pearl


Susan Hoffman Fishman
The attempted escape of more than seventy slaves aboard a ship called the Pearl spotlights issues of morality and law, slavery in a democratic society, and the inherent challenges in deciphering history.

Witnessing the Making of History: The Trial of Slobodan Milosevic


Samuel Totten
The author describes the United Nations judicial process at The Hague while providing a powerful first-hand account of Slobodan Milosevics trial.

Working with the Textbook: How to Enhance Student Motivation