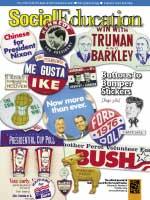 Voting Technology and the Law: From Chads to Fads and Somewhere in Between


Elizabeth M. Yang and Kristi Gaines
A look at current laws and at the evolution of voting technology provides a solid background for a discussion on the integrity of our electoral system.


Charles F. Williams
In its most recent term, the Supreme Court considered a range of important cases relating to the “War on Terror,” federalism, and sentencing guidelines. The author reviews some of the Court’s most significant rulings.

Tinderbox: Economics, Immigration, and Education in a North Carolina Town


James A. Bryant, Jr.
One town’s experience of factory shutdowns and layoffs, coupled by an influx of immigrants, offers a rich opportunity to teach about the outsourcing of jobs while dispelling xenophobic myths and stereotypes.


Candace D. Fisk and Beth Hurst
This story of James Meredith’s fight to integrate an all-white state university serves as a clear example of each individual’s ability to affect social change.

On the Other Side


Lee Ann Potter
The value of an historical document goes far beyond its obvious content, and includes such obscure clues as notations scribbled hastily on the back.


Lee Ann Potter
From George Washington to George W. Bush, politicians have used campaign memorabilia to capture the attention of voters. By studying these items, students can learn a great deal about historical issues and candidates.


C. Frederick Risinger
There are numerous ways to learn about presidents and their administrations; in this article, the author outlines some unique websites to help students and teachers explore them.

The Verdict of the Keys

Teaching about Election 2004 through the International Media


Jana Sackman Eaton
Looking at media reports from around the world enables a broader discussion on the U.S. election and election issues.