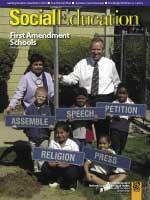 Lessons in Liberty: First Amendment Schools in Year One


Charles C. Haynes and Sam Chaltain
Schools around the country are joining a reform initiative based on First Amendment principles; students and other members of each school community are having an unprecedented voice in shaping life at their institutions.

The Flag and Freedom


Molly W. Andolina, Krista Jenkins, Cliff Zukin, and Scott Keeter
While studies show that civically engaged youth are more likely to become politically involved adults, the authors show that there is more than one way to stimulate such engagement.

From Denver to Caracas, Santa Fe to San Jose: Teaching about the 'Right to Have Rights'


Jennifer Bauduy
With the backing of a new civic education exchange program, groups across Latin America are collaborating to promote education for democracy in their countries.

Encouraging Students to Participate in the Political Process


Charles F. Williams
While commentators speculate on emerging Supreme Court ideological trends, Looking at the Law reviews some of the Courts recent surprising decisions, and looks at upcoming cases.

Affidavit in the Case of Orville and Wilbur Wright vs. Glenn H. Curtiss


Kahlil G. Chism and Lee Ann Potter
Orville and Wilbur Wright were not the only inventors working on airplane innovations. But the Wright brothers patent gave them a tremendous advantage and inhibited manufacturers from producing planes for a time just before World War I.

The World Hangs in the Balance: George C. Marshall and the European Recovery Plan


Rachel Yarnell Thompson
This retrospective on the Marshall Plan for post-World War II Europe offers an assessment of a successful U.S. reconstruction program that benefited both the donor and the recipients.