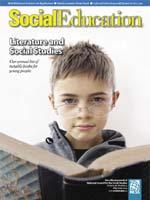 
Christopher R. Leahey
By analyzing print and broadcast media coverage, students can develop their own knowledge and opinions on controversial events.

Germany's Opposition to the Iraq War and Its Effect on U.S.–German Relations


Toni Fuss Kirkwood-Tucker
The tensions between Germany and the United States over the war in Iraq marked an unusual break in what had been a notable pattern of cooperation.


Wynell Schamel
Teachers can use this compelling collection of letters from needy children during the Great Depression to explore relevant issues such as the image of the United States as a land of opportunity, the role of government in the lives of citizens, and the importance of dissent in a democracy.


Lee Ann Potter
During the Civil War, poet Walt Whitman was eager to work for the government. Though federal jobs weren’t easy to come by, a letter of recommendation from Ralph Waldo Emerson was able to push open government doors.

Literature that Promotes Justice for All


Alexa L. Sandmann
Literature that honors and advocates social justice can inspire students to work for a more just society.


Iftikhar Ahmad
For decades, Shirin Ebadi has fought for human rights and democracy in Iran. Last year, she became the eleventh woman to win the Nobel Peace Prize.


This year’s award winners for outstanding nonfiction that highlights ethnic minorities and race relations include books on Cesar Chavez, on life in a World War II Japanese relocation camp, and on the 1960s killing of three civil rights activists.


Merry M. Merryfield
Elementary teachers can make choices that either lead to the development of globally-minded citizens or to the formation of young adults who know little about the world and have no interest in people different from themselves.

Trying Beliefs: The Law of Cultural Orthodoxy and Dissent


James H. Landman
English laws that enforced cultural standards of a religious or political nature had a strong influence on America’s legal system. This legacy continues to affect certain freedoms in the United States today.