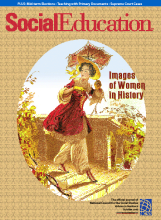 
Ted Engelmann
A close analysis of the Chieu Hoi pass, dropped over areas of Viet Nam to encourage enemy surrender, provides a unique approach to studying the Viet Nam war.


Ernest Morrell and John Rogers
After studying about Brown v. Board of Education in textbooks, high school students in L.A. examine the decisions impact on their local community.

Teaching about the 2006 Elections with the Internet


C. Frederick Risinger
These websites provide an array of resources, lesson plans, and information for teaching about the midterm elections.

Mid-term Elections: The Impact of Local and National Issues


Social Education Staff
Will this years congressional elections force a change in control of the House or Senate? This informational feature reviews influential midterm elections in the past and identifies 24 key House races and 8 competitive Senate races for classes to monitor.

Identifying and Teaching against Misconceptions: Six Common Mistakes about the Supreme Court


Diana E. Hess
Most Americans misunderstand the function of the Supreme Court. Correcting students misconceptions promotes engaged citizenship and will foster a better understanding of the institutions influence on U.S. society.


Charles F. Williams
Recent Supreme Court decisions showed that the new Court is split on hot-button issues. Topics this Court will tackle in 2006 include race and schools, the partial birth abortion ban, and punitive damages.

Letter in Support of the National Historic Preservation Act of 1966


Lee Ann Potter
Progress and development has sometimes led to the destruction of landmarks. The featured document highlights the struggle to preserve historic sites and leads students to consider the value of their own communitys landmarks.

Academic Freedom: A Teacher's Struggle to Include Other Voices in History


Prentice T. Chandler
Some parents were mightily displeased when this teacher included documents from Howard Zinns compilation in an advanced history class. The author provides tips for educators assailed for breaking out of the mold.