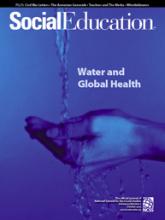 David J. Smith
Students walk a figurative mile in the worlds shoes, when they carry water from a lake to better understand how factors like access to water can affect a communitys health

Protecting the Rights of Whistleblowers


Lauren Robinson
Thousands of federal workers play key roles in safeguarding our nations security. Yet, when some of those workers speak up about government errors or corruption, the consequences they suffer can be dire.

Learning about the Civil War through Soldiers' Letters


Joseph Hutchinson
Letters home from young soldiers give students a close-up view of the Civil War; their sense of empathy further deepens when they must use their imagination and write their own letters home.

Does History Matter? Ask the Armenians


Samuel Totten
Thousands of Armenians recently gathered in the Syrian Desert to commemorate the 90th anniversary of the Armenian genocide. Genocide scholar Samuel Totten describes the two-day memorial and the ongoing impact of that genocide.

A Brief History of the Armenian Genocide


Sara Cohan
This article describes the history of the Armenian people,the problems they faced under Ottoman rule, and the genocide perpetrated against them in the final years of the Ottoman Empire.

Choices for the 21st Century Education Program, Brown University
Although many people in the United States think of slavery as a Southern institution, New England has a more complex history of slavery and slave trading than many realize.

Literature, Literacy, and Legacy: Teaching about the Civil Rights Movement


Elizabeth K. Wilson and Kathy Shaver Wetzel
The authors describe how a novel, such as The Watsons Go to Birmingham 1963, can draw students into the study of the civil rights era.

Looking at the Law


Charles F. Williams
The roundup features significant Supreme Court decisions on the separation of church and state, the death penalty, and property rights. Looking ahead to the next term, the author considers how changes in the Courts composition may influence future decisions.


C. Frederick Risinger
Young people feel a greater connection to history when they are learning about others their age. Here, the author provides a list of websites about children throughout history.