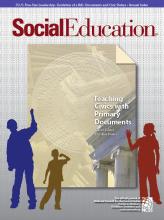 
Lee Ann Potter
Ronald Reagan made history when he nominated Sandra Day OConnor as the first female justice of the Supreme Court. His letter to the Senate is an excellent jump off point for teaching about the separation of powers and checks and balances.

The Evolution of a Bill: Teaching Legislative Process

Christine Blackerby
Most students who learn how a bill becomes a law never actually see a law. This article highlights three documents that trace one bills journeyfor a holiday to honor the nations veteransto becoming a law.


Kahilil Chism
Why have only 27 amendments out of 10,000 been passed? Why did Congressional pay raises take 203 years to be ratified? What sparked the repeal of Prohibition? A close-up look at the 18th, 21st, and 27th amendments sheds light on the intricate amendment process.


Lee Ann Potter
A one-sentence letter from school boy Anthony Ferreira to President Ford stating,  &I think you are half right and half wrong & is one of several primary sources featured in this article that highlight for students the value of responsible citizenship.


Laurel Singleton and Carolyn Pereira
Students involved in a discussion of the text of the Preamble to the Constitution obtain a better sense of the purposes of our government.

Maria Elena Sardinas
The We the People program has taught countless students how to monitor and influence public policy. In Miami, students considered tax exemptions to spur economic growth, stronger driving license regulations for seniors, and a sales tax to fund public schools.

The Civic Mission of Schools


Social Education Staff
The Campaign for the Civic Mission of Schools is leading efforts to advance the causeof civic education.