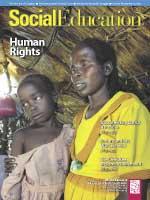 The First Act of Congress


Lee Ann Potter
In the early days of this nation, Congress considered numerous acts as it established the laws of the land. Yet the first ever act of Congress concerned an oath to support the Constitution.


Samuel Totten
Tens of thousands have been killed in a conflict in Sudan. Recently, the author joined a team of experts on the border of Sudan to interview those who had fled the violence in order to determine whether genocide was being perpetrated.


PBS NewsHour Extra
What happens once “genocide” is declared? This lesson plan looks at the events in Sudan and at the issue of genocide. Discussion questions lead students to consider what role the international community should play.


The Center for Teaching International Relations
Members of the international community banded together to create a tribunal to try individuals who seriously violate international law. In this lesson, students will learn about the ICC and discuss whether the U.S. should join.

Torture and the War on Terror


Ed O’Brien
Educators can equip students with the knowledge and judgement necessary to confront situations such as those that occurred at Abu Ghraib by exploring issues raised by torture, discussing constitutional protections, and teaching about international commitments.

From Crisis to Civic Engagement: The Struggle Over Social Studies Standards in Minnesota


Paul Spies, Jennifer Bloom, Michael Boucher, Carrie Lucking, Lisa Norling, and Rick Theisen
When parents, teachers, and other community members in Minnesota learned that inaccurate and biased social studies standards were going to be implemented in their state, they mounted a rapid opposition and effective campaign.

C. Frederick Risinger
This column takes a look at exemplary websites designed by teachers and supervisors that help students with resources, activities, and other course-related information.

The Cherokee Response to Removal


National Museum of the American Indian
This lesson plan offers insight into the Cherokee experience during the native group’s forced nineteenth-century relocation by the federal government in what became known as the “Trail of Tears.”

Experiencing World History through the Eyes of Ordinary Women


Jada Kohlmeier
Primary documents about a young girl growing up during China’s cultural revolution, a Russian peasant living under Stalin, and a woman in sixteenth century Germany offer students a unique perspective of important historical periods.


Avner Segall
While it is common to separate knowledge of teaching and knowledge of content, the author explores whether they can or should be considered distinct from each other.


Social Education Staff
As Iraq nears elections scheduled for early next year, Islamist movements are playing an increasing role in the political landscape. This special section offers an overview of the key groupsboth militant and pragmatic.