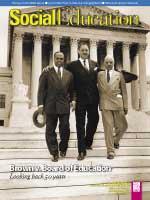 The Power of One: Making A Difference in a Changing World


Denee Mattioli
Being a social studies teacher is a challenge, but we can and do make a difference.


Allan J. Lichtman
This system for predicting the winner of the popular vote in presidential elections has an outstanding track recordand its a great way to show students how many factors influence the way the nation votes.

Teaching about Primary Elections with the Internet


C. Frederick Risinger
Primaries get less media coverage than presidential elections, but they are an important exercise in democracy. These websites will help classes follow the primaries in 2004.

17
Looking at the Law

An End and a Beginning: The Fiftieth Anniversary of Brown v. Board of Education


James H. Landman
Fifty years ago this May, the Supreme Court decision on the case of Brown v. Board of Education changed the course of American history. Here is the background to the judgment that outlawed segregation policies in public schools.

Order of Argument in the Case Brown v. Board of Education


Kahlil Chism, contributing author, and Lee Ann Potter, editor
The Order of Argument in Brown v. Board of Education is a short document, but it can launch students on a long voyage of understanding of this milestone case.

The U.S. Role in a Changing World: A Lesson Plan


Choices Education Program, Watson Institute, Brown University
This lesson plan places students at a crossroads where they consider which of four very divergent paths U.S. foreign policy should take in the future.


Social Education staff
This feature examines the composition and problems of Iraqs Governing Council, along with a chronology of events affecting Iraq in 2003 and U.S. difficulties there.

Teaching about the Middle East: Challenges and Resources


Cyrisse Jaffee
It is hard to find the right resources for teaching about the Middle East, but a joint project by a Harvard University center and Bostons PBS station will help.


William W. Wilen
With the right combination of sensitivity and knowhow, teachers can involve reticent students successfully in classroom discussions.


Roger Clark, Jeffrey Allard and Timothy Mahoney
Since Janice Treckers classic critique in 1971 of the omission of women from history textbooks, the books have included more women, but they still need to go further.